Malaria due to Plasmodium falciparum remains one of the major global health problems and a leading cause of death worldwide. The virulence of Plasmodium falciparum has been linked to the variant surface antigen PfEMP1, which is encoded by 60 mutually exclusively expressed var genes per parasite genome. Exposure to repeated episodes of malaria infection results in the gradual acquisition of partial immunity against PfEMP1. However, how the immune response shapes the repertoire of expressed var genes in parasite populations and how frequent the var expression needs to be varied in a long-lasting chronic infection by undergoing antigenic variation is poorly understood.

We can address these technically challenging questions nowadays by analyzing samples either from controlled human malaria infections (CHMI) using well-characterized laboratory strains or from malaria patients with well-defined characteristics. CHMI by injection of cryopreserved P. falciparum sporozoites (Sanaria® PfSPZ Challenge) allow to determine var gene expression patterns in vivo at the onset and during the course of infection in malarianaïve or lifelong exposed volunteers. Our data using two genetically distinct P. falciparum strains indicate that the parasites reset their var gene expression during mosquito passage in order to express a broad repertoire of subtelomeric var genes at the onset of blood stage infection.

This enables the parasite – in naïve hosts – to efficiently explore the available host cell receptor landscape for sequestration. However, in semi-immune individuals the pre-existing immunity limits the survival of parasites to the subpopulations, which express non-recognized PfEMP1 variants. To get a better understanding of the malaria disease we exploit an optimized RNAseq protocol that allows us to analyze the transcriptomes of field isolates from patients with either varying degree of immunity or different malaria phenotypes.

In conjunctions with the ever-increasing number of sequenced P. falciparum genomes from the field these data sets provide a power full tool for hypothesis-free analysis of parasite factors contributing to malaria disease. First results confirm an association of EPCR-binding PfEMP1 variants with disease severity and a naïve immune status; vice versa CD36-binding variants and the conserved var1 variant are expressed in non-severe cases or pre-exposed patients. 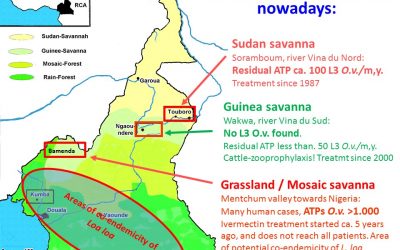 ABSTRACT: Onchocerciasis research and elimination in Cameroon – a history of success?